“I think unconscious bias is one of the hardest things to get at,” Ruth Bader Ginsburg. Unconscious bias (or implicit bias) is often defined as prejudice or unsupported judgments in favor of established stereotypes, which affect actions and decisions.

Social media are among common means of influence on the unconscious bias of the British and Arabs in Britain. They can encourage in with echo chambers, an environment where a person only encounters information or opinions that reflect and reinforce their own.

The Arab market in Britain, like other markets, becomes more willing to respond to advertising campaigns when attached and understanding their presence as part of diversification and inclusion in ad campaigns. “If your customers are different from you and they feel unrecognized, you will begin to lose them.” -Michael P. Krone

Therefore, to avoid the loss of the Arab market in Britain. It is important that the content provided acknowledge their importance. “copyrighted work is owned by the people we serve jointly,” says Myralda Derks, president of the consumer marketing vision team at Unilever.

Therefore, it is important to follow the general rules to provide content that promote diversity and inclusion, such as:

Identify unconscious bias: Before creating content that supports diversity and inclusion of Arabs in Britain, unconscious bias against Arabs has to be identified in one’s self and the concerned organization and environment. Afterwards, it would be best to work on removing it; to reveal your true self, for one should be aware not only of their conscious thoughts but also unconscious ones.

One of the successful advertising campaign requirements is understanding the target audience sectors’ challenges, feelings, and needs. For example, despite the fact that the Arabs in Britain are one of the market sectors covered by the diversity and inclusion marketing campaign, not all the Arabs in Britain may be interested in the same product. It is therefore vital to determine the target audience more accurately.

Does the copyright team reflect the diversity of the target audience? Does the work team include Arabs in addition to other individuals representing the target market groups? This will have a more significant potential to carry out a successful diversity and inclusion marketing campaign for the various target audience groups.

The team can be diversified to represent the diversity of the target market by tools that help select the right staff, freelancers, and external authorities to achieve that diversity. Arabisk, for instance, can be used to search for Arab employees in the UK. It can even be used to provide them with diverse and inclusive marketing content.

Identifying the problems faced by the target audience in their different sectors helps explain how the product can contribute to solving their problems during the marketing campaign. It also gives them a feeling that the organization cares about them and their needs.

It is also important to realize that the product offered by the organization may meet only the needs of one sector of the target audience. For example, the needs of Arabs in the UK that Arabisk London fulfills are different from the needs it meets for the rest of Britain’s population.

Social media in the UK

Internet penetration in the UK is one of the highest in Europe with nearly 85% of people being connected to the internet. In general, British SMEs are quite familiar with the use of social media.

Legislation covering the use of social media has developed in the UK. The Advertising Standards Authority (ASA) offers guidance, which stipulates that advertisers’ marketing communications on their websites and social networks should follow the same principles as other media.

According to Statista , the following chart shows usage penetration rate of social networks among of active internet users in the United Kingdom in 2020 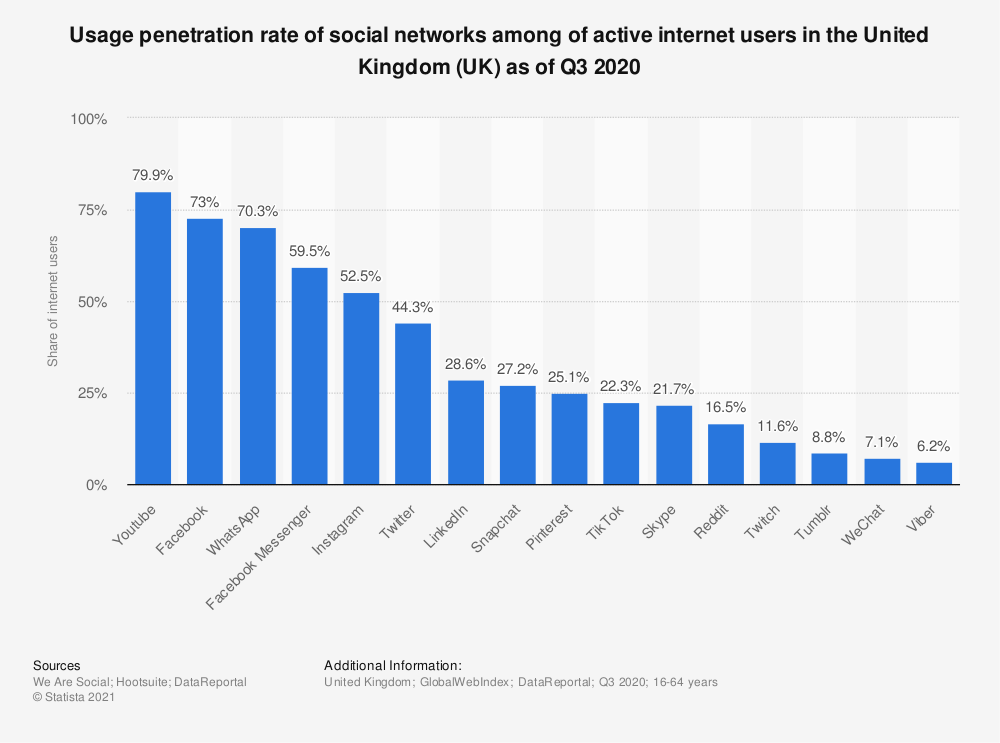 YouTube is the most active social network among UK Internet users, followed by Facebook. However, given the increasing amount of information available on the internet and the diversity of social media, the importance of choosing the right social media platform to market to market segments target has increased too.